The film is produced by Mark Herbert and Peter Carlton for Warp Films, and New Regency’s Arnon Milchan. Executive producers are Yariv Milchan and Michael Schaefer for New Regency and Daniel Battsek and Ollie Madden for Film4, who developed the project alongside Warp Films. The film will be released worldwide via 20th Century Fox.

Inspired by the true story of Jamie Campbell, Everybody’s Talking About Jamie follows 16-year-old Jamie New who lives on a council estate in Sheffield. Jamie doesn’t quite fit in. Jamie is terrified about the future. Jamie is going to be a sensation. Supported by his brilliant loving mum and surrounded by his friends, Jamie overcomes prejudice, beats the bullies and steps out of the darkness, into the spotlight. Recent Academy Award™ nominee Richard E. Grant (Can You Ever Forgive Me?, Logan) plays former drag queen and Jamie’s mentor Hugo with BAFTA nominee Sharon Horgan (Catastrophe) as Jamie’s teacher Miss Hedge and BAFTA winner Sarah Lancashire (Happy Valley) as his mother Margaret. Shobna Gulati, from the original stage cast, will reprise her role of Ray.

Inspired by the BBC documentary Jamie: Drag Queen at 16 (Firecracker Films), the stage production originated at the Crucible Theatre in Sheffield, before it was picked up by Nimax Theatres and transferred to London’s West End, where it continues its highly-successful run.

“Who would have thought when Jamie Campbell first put on his prom dress, that eight years later we would have brought together the best of British and Irish acting talent to tell his story. As well as launching a brand new star in Max Harwood to play Jamie himself, we’re so thrilled to welcome Sarah, Richard and Sharon to the Jamie family. Now the party’s really getting started.”

Producer Mark Herbert from Warp Films adds: “Warp Films are absolutely delighted that Richard, Sharon and Sarah are joining the JAMIE family, and we are so excited that after nearly a year of searching we have found our Jamie New – we can’t wait to start this journey with Max and to share this film with the world ”

“We are incredibly excited to be bringing this poignant story to screen and are fortunate to be working with such an immensely talented group of actors and filmmakers. We know Jamie’s story will resonate with audiences on a critical and commercial basis,” stated Yariv Milchan, New Regency’s Chairman.

“From the moment Warp suggested we see the stage show of Everybody’s Talking About Jamie, we were determined to help bring this joyous, life-affirming celebration of Jamie New’s remarkable tale to the big screen. This is one of those projects that proves the theory – the more personal the story, the more universally it resonates. And in this case, with singing and dancing to boot!” adds Ollie Madden, Film4’s Head of Creative.
After receiving over 3000 applications from the open casting call, newcomer Max Harwood was cast in the title role of Jamie New. Harwood, a 21 year old from Basingstoke is currently studying at Urdang Academy in London. This is his first professional role. Following a year’s search for Jamie’s classmates via regional casting calls and outreach, 20 young locals from Yorkshire and the surrounding regions were cast.

Director of Photography is Chris Ross (Yesterday), with costumes by Guy Speranza (Stan & Ollie) and hair and make-up by Nadia Stacey (BAFTA winner for The Favourite). Janey Levick (BAFTA nominee for This Is England ’90) is Production Designer. 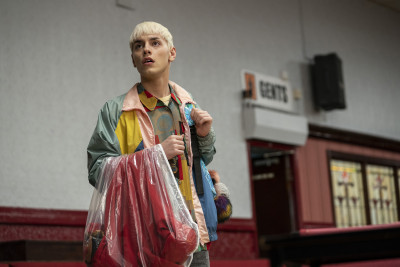